For those wondering, SWIV stands for Special Weapons Intercept Vehicles. Third in a series of shooters that started with the awesome Silkworm, Mega SWIV is actually a port of the Super Nintendo game Super SWIV, more commonly known in the west as Firepower 2000. Besides being a port, one of the other distinctions of Mega SWIV is that it was released only in Europe. And just like another European exclusive Mega Drive shmup (Xenon 2 Megablast) this game is region-locked, so in order to enjoy it in consoles from other regions be aware that you might need to use bypass cartridges. Going by the YouTube videos I've checked it also seems that the game runs faster when played on a 60 Hz console, a very welcome increase in pace if you ask me.

There are two ways to play this game, either with a helicopter (SWIV-1) or a jeep (SWIV-2). In a 2-player game each person pilots one of them, but if you’re playing solo you need to press A, B or C at the start screen to choose/change the craft. There it’s also possible to remap the controls, which by default work with B for main weapon, A for main weapon change and C for special weapon. Throughout the game weapon items are released by destroying yellow square bunkers on the ground. Main weapons can be bullet (needle gun), flame, plasma (spread shot), laser (flashing laser beams) or ionic (a straight shot that splits to the sides in 90º upon hitting something). Laser and ionic are unavailable from the start, appearing in later levels only. All of them are powered up separately by taking successive items of the same type, up to seven upgrade levels. 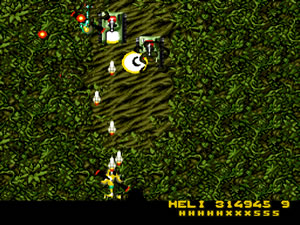 Welcome to the jungle, we've got fun and games

Special weapons are indicated by letters. H stands for homing bullets, X fires a single batch of straight missiles and S triggers an expanding ring of fire. The most recent weapon collected is always the next one to be used (LIFO stack). It's possible to stock as many special weapons as you want, but only twelve of them are shown below the score counter at any given time. X is the most powerful (a single one can take down any of those hatches of the third boss) while S is excellent to take care of enemies that are closing in. H is the weakest one and tends to drift in circling movements, often failing to hit the desired target. Special weapons aren't lost upon death, and as long as there are special weapons in stock the level of each main weapon is only visible while you’re cycling them with button A or briefly after you die.

Every once in a while the player might come across a small area concealing a bubble. Land a few shots to release the bubble and take it for a temporary invincibility shield, or shoot it again to trigger a screen-clearing explosion. The last item, the star, is mostly released by tanks but can be dropped by other enemies as well. Besides being worth 100 points, at the end of the stage each star contributes with 1.000 extra points.

Death for both SWIVs comes with a reduction of one upgrade level for all weapons, therefore dying repeatedly can lead the player to a dangerous underpowered condition. As a rule of thumb, whenever I lost the spread capability of the plasma weapon I would consider myself in dire straits. I used to think the helicopter was the best option to play the game with, now I’m not so sure because there are clear pros and cons for both types of vehicles. The heli crashes onto airborne enemies, but it’s able to fly anywhere around the screen and is absolutely immune to ground enemies. The jeep crashes against any ground obstacle that takes damage (including item bunkers and shield holders – release them first, collect next), but can fire in 8 directions (shoot to lock the aim, stop shooting to change direction) and is absolutely immune to airborne enemies. The jeep can fall off cliffs (last stage only) and be hindered by walls, but whenever it gets squished by something the scrolling takes over and sends it forward. There’s no jump input for the jeep in Mega SWIV, unlike what happens in Firepower 2000.

With a strong military theme and a perennial Amiga flavor - reminiscent of the previous chapter in the series - Mega SWIV stands tall as a decent cross-platform adaptation. On gameplay merits it’s as close as it gets to the original material, unlike some criticized examples such as Thunder Spirits (bridged by Thunder Force AC, but you get my point). Minor differences in relation to the SNES original appear in the slightly less colorful graphics, lighter explosions and subdued sound effects. A few enemies are missing here and there, and since the game was made less intense the annoying off-screen bullets when you move across the wide horizontal span of the playing field aren't such a pain. That alone should make the Mega Drive port the easier version, but the game also counts with a merciful extend scheme that grants a new life for every 50.000 points scored. The bonus based on the number of remaining lives at the end of the game was removed though, but this doesn’t really matter because there's no time out and you can kill cannon fodder forever on the last boss for whatever score you want to achieve… Even though the maximum life stock shown during the actual gameplay is 9, the real number of lives can be glanced in between stages.

Due to the unusual combination of a helicopter and a jeep, Mega SWIV might certainly be the best co-op shmup experience to be had on the Mega Drive. However, much of the fun is in experimenting with both types of ship. A brief animated intro sets up a nice preamble for the action, also showing info stats for each SWIV craft. The beginning of the game seems a bit generic (the first stage is exclusive to the Mega Drive version though), with grayish terrains followed by deserts and forests. Jeep players will get to pilot an inertia-propelled boat on the second half of the fourth stage. During the fifth stage you need to pilot a jet, and then the game resumes in a volcano-filled area before you venture into the final enemy fortress. The music fits the theme well, I particularly enjoy how bassy it sounds.

The truncated scoring system is a letdown, but Mega SWIV can provide some decent shooting fun if you're able to cope with the excessive horizontal wobbling. I had already cleared the game with the heli, so this time around I decided to use the jeep. Beating it again wasn’t as hard as I expected, but it certainly was more fun. I scored barely over 1 million and then decided to kill the last boss with the J special weapon (it comes down from the top automatically once you get to the boss). 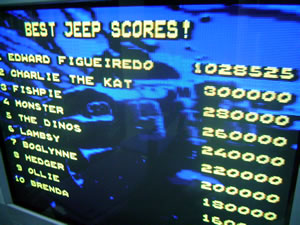 Note: this text was cross-posted with minor changes on Sega-16.
Posted by Edward at 4:05 PM