It's difficult to find shooters inspired by other entertainment media that are held in high regard by the community. More often than not they don't go past the likes of pure fan service, being eventually ignored and relegated to sad footnotes. Does anyone seriously care about Geppy-X, Bokan To Ippatsu, Tekkaman Blade, Thunderbirds (NES), Gatchaman - The Shooting or Super Airwolf for the Mega Drive? Sure there are exceptions to this, such as Macross - Scrambled Valkyrie and Silver Surfer, but they're few and far between. In 2010 the category was expanded on the Xbox 360 with Strike Witches - Hakugin No Tsubasa, another shooter based on an anime/manga series. Exclusive and region-locked to Japanese consoles, the title is just one of several games produced to supposedly expand the reach of the base material.

Fans of the anime who can understand Japanese are at home here. The Story mode is full of (instantly skippable) dialogue intermissions and interaction between a multitude of characters. They are all teenage girls with propellers for legs, flying around with machineguns in an effort to stop an alien menace called Neuroi. It's an alternate reality setting that takes place during World War II. Luckily for us shmuppers, Arcade mode removes all the useless conversation and sudden interruptions, but the catch is that to unlock it you need to beat Story mode with one of the preset teams - and even so only the respective characters are unlocked. Continues are allowed to achieve this, and if the imposition sounds stupid at least you can take the chance to know the characters and stages during two hours and four clears (it takes roughly half an hour to complete the game).

On the outside Strike Witches looks like a combination of Trouble Shooter and Deathsmiles, but the default twin stick control scheme makes it a different experience. There's also a somewhat hidden arcade style control that doesn't use the right stick: the aim is locked whenever you shoot with a dedicated button (since the game clearly wasn't designed with this control scheme in mind I avoided it completely). All teams are comprised of three girls, with one of them being the leader and the others following her in a formation facing forwards, facing backwards or trailing. Enemies come from all sides and force the girls to move around the whole screen, with the team’s hitbox being a tiny red dot on the leader’s chest. With dual style controls the left stick is used to move, the right stick to aim and shoot. By default, RB switches the formation and LB/LT switches the leader. The last input is given by RT: it’s a special attack that combines the magical abilities of the trio into a concentrated blast that lasts as long as their power bars isn’t depleted. Each girl has her own power bar, which is not to be confused with the group's health bar. 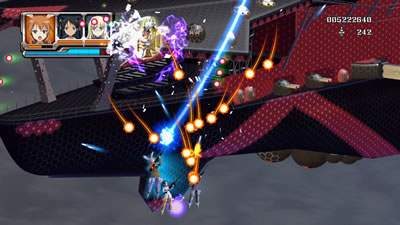 All girls fly at different speeds, have different power bar recharging times and bear unique weapons, be it straight shots (vulcan, grenade, drill, intertwining wave pattern) or shots with mild spread (regular spread, w-shape spread, two machineguns). Some of them have special abilities such as homing auxiliary shots. Their weapons are always at nominal power when they’re leaders, getting down to a lower power level and a slower rate of fire whenever they’re following the lead. Different character combinations produce different special attacks, and most of the fun while learning the game is in the process of testing several teams to see which works best for you.

The scoring side of Strike Witches has two layers to be explored. The first one is collecting the crosses left by destroyed enemies, which are sucked in automatically if they’re within a certain range. The first hundred is worth 1.000 each (bronze), the second hundred is worth 10.000 each (silver) and after 200 crosses collected each one will be worth 100.000 points (golden). It’s pretty simple and straightforward. The second layer in the scoring system revolves around extracting more crosses than usual by using the special attack. Doing it is not that simple though. If all girls have their power meters full a special attack comes with invincibility (indicated by the blue aura around them, which also cancels bullets). Once the special attack is over (either because the power bar of the leader is depleted or because you let go of the trigger) the recharge process takes a few seconds to start, during which you cannot activate it again. Once the recharging starts the special attack can be used again, but this time the girls are not invincible - a special attack with invincibility is only possible when a subtle sound cue is heard, a clear signal that the recharge is finished for all of them. Important: the recharge cycle will only start if the special attack trigger is not pressed, if you keep pushing it the power bars will remain where they are and no special attacks will ever come out.

At the end of the stage the player is given a bonus based on the number of crosses collected, destroyed enemies and hits taken. Crosses × enemies × 10.000 equals nominal bonus - the more hits you suffer the less of this bonus you achieve. Speaking of getting hit, if the eight health cells are gone it’s GAME OVER. There are no recovery items (actually there are no items at all besides crosses), but the health bar is replenished at the start of every stage. This alone brings the challenge to reasonable levels even though things get quite hectic close to the end, where memorization and careful use of the special attacks become more important. Fortunately it’s possible to practice each stage separately.

Given the unsuspected depth of the scoring system, the lowest point in Strike Witches is in the level design. The catchy introduction and HD renderings of the characters are cool, as well as the character art in transition screens, the good variety of weapons and the intensity of later sections in the game, but for a shooter that scrolls horizontally it’s a bit weird that there are absolutely no obstacles. All you see is the vastness of the skies according to the unique theme of each stage, with a few exceptions like the tunnel in the second level or the descent into the destroyed landscape of the fifth stage. All bosses are variations of the same enemy, a red shape-shifting creature that takes the form of jets, tanks, spiders and all kinds of mechanical things. The objective is to defeat each successive form to expose and destroy its pink core. Even though these bosses have the most varied shot and movement patterns, it gets tiring to see the same checkerboard textures at the end of every level. On top of that, every single enemy is red or dark with red details. Was it so hard to put some green or blue?

Another aspect that bugs me a little is character speed. Even the slowest girl still moves too fast for my taste. When enemies swarm from all sides the act of dodging often results in a collision because I can’t control my leader properly, and the best way to deal with it is to be proactive so that dodging becomes less necessary. Sometimes a hit will take away two health cells, particularly when the offenders are those pesky lasers or when you get rammed by a large enemy. Lastly, I don’t mind the fact the menus are all in Japanese, but I wish the developer had added actual Roman names to the characters in the Arcade mode selection screen. It’s tough to memorize all of them going just by their cute faces. 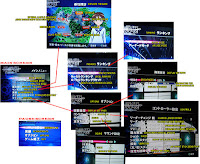 Is bland design enough to qualify the game as pure fan service? I don’t think so. Overall Strike Witches comes out as a feeble yet mildly fun shooter. Non-shmuppers will be able to credit-feed to the end, but will have no access to the true last boss (only prerequisite is to get there on a single credit). Although simple, the scoring system is engaging and offers enough depth for those who play for higher stakes, so the game at least tries to cater to all kinds of gamers. The music isn’t remarkable but fares better than the misguided graphic design. Be prepared for loads of anime voices though.

The only extra in the limited edition of Strike Witches for the Xbox 360 is a figurine of protagonist Yoshika Miyafuji. The game wasn't very well received by the shmup community, but the popularity of the series was enough to guarantee a port for the PSP in 2012. On the 360 my best high score in Arcade mode on NORMAL is the one below, playing with Gertrud Barkhorn, Lynette Bishop and Perrine Clostermann. Perrine is a must for me because of her electrified homing shots! 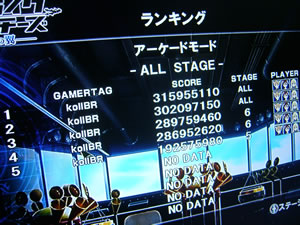