For a little while I was thinking how rude Video System was to PC Engine fans. Why did the company give them Rabio Lepus Special, a rearranged version of their first shooter, instead of making a port for Sonic Wings? And then I figured the PC Engine was probably out of the mainstream curve by 1992, the year Sonic Wings hit the arcade scene... Rabio Lepus Special is from 1990, and a brief look upon some screenshots doesn’t give away the differences from arcade and console variations of the game starring a flying rabbit. That says a lot about how simple the original is, which leaves some room for the PC Engine iteration to shine on its own merits even if it’s just in a faint glow of obscurity.

No hints to the story exist before you start the game, but the shooting bunny is actually on a mission to rescue a royal family kidnapped by a dark villain. In between some of the stages you get a glimpse of them amidst a few lines of Japanese dialogue (the game was never released in the West). The rabbit’s arsenal consists of a single shot (button II), an assortment of homing missiles (button I) and his bare, glove-clad hands. The single shot can’t be upgraded but you can acquire more homing missiles by taking the correct item, whereas if you’re shooting the act of punching happens automatically whenever an object or enemy is at point-blank distance (hence the original’s Western title of Rabbit Punch). The punching thing is what makes this game unique, but using it requires a certain bit of practice because it’s really easy to get hit and die.

A snippet of the first stage
(courtesy of YouTube user Encyclopegames)

Every life comes with three health cells, so unless you take a carrot to restore an empty cell you’ll die on the third hit and get sent back to a previous checkpoint (there’s no partial damage anymore, therefore no carrot shower at the end of the level). On his way across outer space, satellite caves, a planet’s surface and the enemy’s lair the bunny hero is able to find carrots and other items inside static spinning barrels. You must shoot or punch the barrels to release the items, nothing comes out if you just touch or ram into them. Besides extra missiles and carrots for health there are also money (extra points), a red raccoon (a generously long period of invincibility) and a yellow ribbon (increases the power and duration of the homing missile attack).

Looking at Rabio Lepus Special more closely we can see that it lacks the intensity of the arcade while having fewer details, but nevertheless the game preserves the original style and feel with good results. Not only do the main inputs and most gameplay devices make the transition intact (only the spring effect is missing), but the enemy cheapness is also duly reproduced. This means you won’t go very far just by reacting to whatever comes at you while the screen scrolls. Certain enemy attacks will hit you no matter what you do unless you’re cleverly positioned or use a homing missile to proactively take care of them. There’s no going around this aspect of the gameplay, and in order to enjoy the game you must accept it. When you do that Rabio Lepus Special becomes less of an annoyance, turning into a manageable challenge once you notice that you don’t need to be stingy with the homing missiles.

Stage structure is where the biggest departure from the original lies. Earlier levels are the longest ones, and as the game draws to a close Video System gets shamelessly lazy: the last two stages (out of six) are just made of previously seen bosses (except for the final boss). The boss rush seems to have been split just so we wouldn’t notice how short the game actually is, even with the uneven stage lengths. With three bosses, the 2nd level is the longest one, while the 3rd and 4th go by really quickly due to the fast scrolling. Of course it takes lots of attempts and solid memorization to handle the ridiculous speed of some enemies. Floors and ceilings don’t do any damage but walls are just as harmful as the next jumping fish. At least health is fully restored when you start a new stage, and whatever items you had are properly carried over. 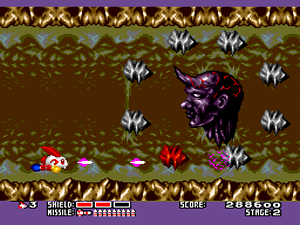 Where have I seen this before?

Digging a little deeper for details gives a bit more substance to Rabio Lepus Special. For instance, preserving health is better for scoring because each extra carrot is worth 2.000 points. Punching a barrel that’s closer to the bottom of the screen is the most guaranteed way to get the corresponding item, otherwise it will just land off-screen or inside a wall. A lost power ribbon drifts slowly to the left, so by all means try to take it again you if lose it: more powerful missiles make a huge difference in survival, especially because they are capable of smashing stuff that’s normally indestructible (such as the crystals in stage 4). And don’t underestimate the power of your fists, even some bosses can be punched in the face for faster and cleaner kills. By the way, the biggest part of the fun is in figuring out boss patterns and how to deal with them.

Even though Rabio Lepus Special is underwhelming in many aspects, it should at least be commended for having a more fitting soundtrack than its source. Given the game’s short duration, the lack of extra lives and extends isn’t such a constraint (more continues and other tweaks can be added by means of simple tricks). Thanks to the absence of any proper message during the end credits, the first couple of times I beat the final boss I failed to notice there was a second loop with a slightly different color palette, more bullets and much stronger enemies.

And this is my best score, reaching stage 2-1: 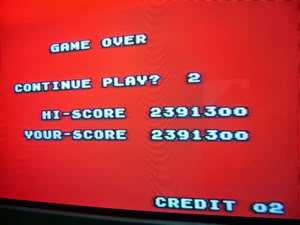