Top rarity on the Master System? Check. Top shmup on the Master System? Well, that’s debatable. Released only in Europe and Brazil, Power Strike II is a late sequel that does not correspond to Aleste 2 in the same way Power Strike corresponds to the first Aleste. Even though it follows on the same gameplay footsteps it's actually an independent adventure with a wacky storyline involving the great depression of 1929, sky pirates and Italy. All is shown in a nifty intro that also tells your daily job is to take down these pirates (we see their ugly faces at the start of every stage, as well as their reward figure in points). Other than that, prepare for another iteration of the frantic formula initially presented by Compile in Zanac.

On the outside this sequel looks very much like Power Strike, therefore it takes some playthroughs to fully understand how different both games are. They’re graphically comparable, but in Power Strike II the general plant menace is replaced by landscapes on water, islands, mountains, refineries and medieval castles (Italy?). As in every Zanac variation released till then there isn’t anything special about the ground sprites, what makes the experience feel memorable is the speed at which the screen scrolls. Power Strike II pushes the brake pedal a little bit and doesn’t fare that well in the music department, but the characteristic 8-bit Compile rush is still there. A little of the regular Master System flicker and rare bouts of slowdown should be expected though. 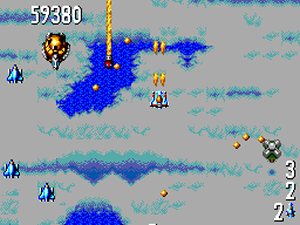 Chasing pirates across the sky

The act of starting a credit lets you choose which special weapon to take off with. Special weapons are numbered from 0 to 6 and fired along with the regular shot that’s upgraded by taking the tiny P chips released by carriers or by destroying specific enemy waves. This numbering makes sense within the context of the gameplay, for every special weapon has six upgrade levels that are reached by sticking to the same number (in the lower right corner you see, from top to bottom, your current special weapon, upgrade level and life stock). Firing is accomplished with button 1, and selecting between four available flying speeds can be done with button 2 (you see the current speed “come out” from the ship as you press the button). If you so wish it’s possible to fix the speed in a unique setting and enable the pause function on button 2, thus eliminating the most glaring functional weakness of the Master System console. While that might be advantageous for some I don’t use this special pause because I like to fly faster in certain places, such as during the fight against the 3rd boss.

Available special weapons are: 0/shell up (just rapid fire on the regular shot), 1/shot gun (spread pattern with shorter reach), 2/missile (guided missile that flies forward), 3/burner (short-reach fire weapon that expands with trailing options when upgraded), 4/absorption (homing shots that look like the hunter weapon from the Thunder Force series), 5/destroyer (forward-travelling missiles) and 6/napalm (spiraling clusters that don’t actually look like napalm to me). All special weapons are useful and none of them is downright awful, but of course we all have our favorites. I always start with 4 and keep it for half the game at least, then I’ll either move to 3 or 5. Especially important for tight situations is the special wave blast that’s triggered whenever you let go of the fire button. After all, it destroys enemy bullets! The duration of this charge release seems to be directly proportional to the power level of the main weapon.

One of the main differences from the first Power Strike is that here there’s no limited ammo for any weapon, and when you die you only lose half your power instead of losing it all. Other items you might come across consist of colored crystals (red, blue, yellow) that spin quickly around the ship and protect it from incoming bullets while providing slight upgrades to the ship's firepower. Honestly, everything moves so fast and some crystals cycle colors so often that I don’t even care which color I take… The player can also come across a small ship or a smiley face for 1UPs, but besides granting the 1UP the smiley also adds 3 power levels to the special weapon. Tip: timing the moment of collecting any of these items is important if you want to take advantage of the brief invincibility that comes with it. Finally, besides item 1UPs the player can also count with score-based extends at 20.000, 100.000, 200.000 and cyclically at every 200.000 points afterwards.

With 8 stages and fast paced gameplay, Power Strike II outshines the first chapter mainly because of two design aspects: bosses and the scoring system. Bosses aren’t just a gathering of turrets anymore, they’re bulky flying machines and get increasingly harder towards the end. There’s no time out during boss fights but no safe spots either, so you’re still allowed to milk them as much as you want provided you’re sharp enough to dodge lots of bullets (crystals help for a while but they eventually disappear). As for the scoring system, once you max out a special weapon all further items of the same type are worth 10.000 points each. For this reason milking bosses is not only about destroying their bullets and missiles, but also letting them live so that the item carriers keep coming at regular intervals (carriers always bring special weapons in order, as in 0 → 1 → 2 → 3 → 4 → 5 → 6 → P chips → 0 → …). All of this leads to a simple high scoring rule: stick to the same weapon, don’t die and let bosses live longer for more 10K bonuses.

After spending a good time with this game I must say I agree only partially with the widespread praise it gets. I can understand why it ranks as best Master System shooter for some people, however my shmup clock ticks faster for stuff like Choplifter and Fantasy Zone. Power Strike II is solid and fun but in my opinion it’s no standout for graphics or music, and would’ve benefited a great deal if it had random enemy spawning routines - that’s the reason why none of the Aleste games on the Master System can’t really match the brilliance of Zanac.

Here’s my best 1CC result on Power Strike II, played on Normal. I had no pause activated on button 2 and chose absorption (4) as the initial special weapon. 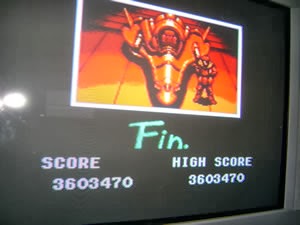 Following the trend of changing basic mechanics while preserving the Aleste name somewhere within the game concept, the series continued in adaptations for the Game Gear and more powerful consoles. Next in my list to (re)play is MUSHA on the Mega Drive.
Posted by Edward at 5:00 PM