It was another lazy afternoon. I took the AES out of the box again in order to test two newly arrived games, and half an hour later I was ready to return it to the shelf when I thought “well, it wouldn’t hurt to spend some leisurely time with Twinkle Star Sprites”. Based on the previous experience I had with the Saturn version, my thinking was that it would take little to no sweat to beat the game with two or three different characters. And it was also the chance to finally try it in its original incarnation – the only thing that wasn’t original in my case is the cartridge, a flawless conversion that saved me an arm and a leg (for those who don’t know, Twinkle Star Sprites is the rarest and most overpriced AES shooter).

It turns out the 1CC task wasn’t as easy as I had envisioned, in fact it was pretty much the opposite. I tried playing with the weakest characters to see if the fights would last a little longer, but soon enough it became clear that Mevious and Memory were quite a diabolical couple. Long story short, I was forced to leave my leisurely intentions aside and dedicate serious time into plowing my way through the game. Granted, it was still a fun ride, maybe more fun this time around playing solo, even though I would love to have a coleague around to taste the Competitive Mode in its full glory.

With its versus-oriented gameplay, Twinkle Star Sprites is definitely one of a kind (there are others like it but none of them as charming). The objective in each of its seven stages is to defeat the opponent on the other side of the split-screen. Everything is extremely colorful and cheerful, the design dominated by a cutesy anime style from start to finish. I was thrilled to finally be able to understand the snippets of dialogue in between levels (all text defaults to English - or hilarious Engrish - in a Western console) and because of that I even felt compelled to try the game with different characters in order to find more about their behavior.

Only two buttons are needed to play the game, but it’s possible to activate an additional function for main shot with autofire. When this is enabled you get main shot on button A, bomb on button B and auto-shot on button C. Bombs have limited stock and charge shots can be fired in three power levels by holding down and releasing A. Both players are faced with the same enemy (golem) waves in order; each destroyed golem produces a minor explosion that affects all nearby golems, and if they get popped in groups of three or four a fireball is launched into the other player’s area for a basic attack. If an incoming fireball gets sufficiently shot at it's possible to send it back to its creator, and if it gets caught in an explosion it might return as a more potent fireball or the character’s specific attack (which can also be generated by firing charge shots at level 2 or 3). Some fireballs descend from the top in a straight line, others develop an aimed arching trajectory. This second type leads to a very important and strategic aspect of the gameplay, the one related to positioning and the ability to lure enemy fireballs for better dodging opportunities.

Destroying golems in a row gets progressively trickier because their health is color-coded. Red enemies take one hit to destroy while purple ones take five (the complete health scale is 1-2-3-4-5 for red < yellow < green < blue < purple). At some point they start coming with colored shields that must be broken before you can actually hit them. Successive explosions and reflections are registered into a hit count that gives out score bonuses, and the resulting mayhem can be heightened by two factors: boss attacks and fever. Boss attacks can be generated either by a full level 3 charge shot or by achieving an extraordinarily high hit combo. Fever is what happens when you explode a glowing orb within a golem formation: the character moves faster and the amount and speed of fireballs going to the opponent’s side is increased considerably. The fever orb is always preceded by two exclamation marks (!!) that can also mean you’ll be getting a coin that flies around flipping between two of the following items: extra bomb, star (eliminates all golem shields on screen) or $ (successive bonuses of 10, 100, 1.000 and 10.000 points while you keep getting the same item – get a different one and the next $ will be worth 10 points). A PERFECT is achieved when a golem wave is destroyed with the minimum amount of shots possible, and getting many of them in a row results both in more points and faster appearances of the !! symbol.

How many blows do you need to kill an opponent? All characters start with a health bar of five hearts. Bumping against a golem takes away one heart, getting hit takes three hearts. Every time a competitor is hit half the damage is refilled in the opponent's health bar. Whenever you bump into a golem you get stunned for a few seconds, and during this time you’re completely at the mercy of your foe because you can’t even bomb (dying quickly by getting bumped twice and then toasted is really rage-inducing). Also when stunned the character's power and speed are kept at a lower level for a few seconds (getting hit by a projectile doesn't have the same effect though). You can't die by being stunned when you have one or half a star left.

For each completed round you get bonuses for maximum hit count and clear time. If the fight drags for too long a death golem appears alternately for both players, gradually increasing in speed as he gets killed and respawned. Getting touched by him means instant death. 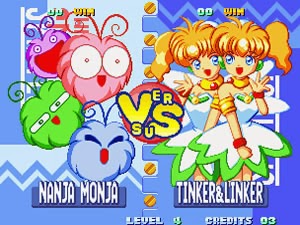 There are three modes of play in Twinkle Star Sprites. Character Mode lets you choose between nine goofy competitors with varying attributes for speed and power (they all share the same health). In Story Mode you play exclusively as Load Ran, the protagonist Sailor Moon-esque blonde witch. And Competitive Mode is where you want to go for some head-to-head shooting combat. In both Character and Story modes you play four levels with randomized opponents before facing the trio of final bosses: Dark Ran, Mevious and Memory. Character voices abound and music themes are nice overall, with more than one BGM for some of the initial stages. It’s obvious that the real value of this game lies in the Competitive mode. Playing the solo variations can be either delightful or infuriating: relax and enjoy the ride for a tour de force on opponent reading and reflex testing, play for score and see yourself go nuts with opponents dying for nothing or fiercely walling up for no reason. Extends are earned at every 500.000 points, and for each life in stock upon completion you get 100.000 points.

In revisiting this game I tried to play exclusively with the weakest + fastest characters (1/3 power, 3/3 speed). Arthur Schmitt was the first, and the one thing I didn’t like about him was how weak and slow his shot is. In later levels it’s really tough to handle things when under pressure. Then I switched to Kim, whose shot seems to be slightly more powerful. His bomb also lasts a little longer and often causes slowdown (which, by the way, is a constant companion but never hinders the gameplay in any way). Regardless of the character chosen, Twinkle Star Sprites offers an intricate shooting engine where timing and anticipation might matter more than the actual dodging. Pursuing a 1CC with the highest possible score can be particularly painful due to the nature of the AI: I defeated Dark Ran with 5 seconds of play once, but I lost count of how many times Memory fried all three lives I had in stock when reaching her. After a while I couldn’t help but think about Takashi Miike's Audition, that movie where a cute girl tortures, dismembers and slowly kills the protagonist with the sweetest smile on her face. Memory is the same, all cute and sweet while raping her opponents to shreds. While Mevious is at least evil-looking although not nearly as tough, Memory is so cute it hurts!

I assume having a tougher final boss is good for scoring in the long run (meaning for very experienced players), but I was really surprised by how harder the Neo Geo original is when compared with the Saturn port. Was it maybe the amount of slowdown? The stock Neo Geo stick I used? Or maybe I’m just too old for this shit, who knows? Well, by his last appearance Roger Murtaugh had been too old for his shit for more than 10 years so there’s still hope for me, right? I wonder how I'll fare when I have the chance to try out the ports for the Dreamcast and the Playstation 2...

Anyway, the 1CC mission was accomplished with Kim on difficulty setting 4 (MVS): 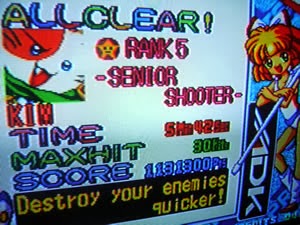