Have you ever wondered what a mix between Einhänder and Thunder Force V would look like? Now give it the most rudimentary budget treatment you can think of and chances are you’ll end up with something like Space Shot in mind. If it’s still hard to figure what I’m talking about don’t worry, the “dirt cheap” qualification applied to this game easily extends to price tags. With that also in mind Space Shot might actually achieve an enjoyable status, even if for a brief moment as a guilty pleasure. The problem with it is that the gameplay is marked by ambitious ideas bungled by poor execution, in a clear case where simpler, more straightforward mechanics would’ve been much better.

As a courtesy from the budget publishers, the “Shooter” name in the cover is merely an attempt at establishing a series rather than the proper name for a game. It was only recently that I found out the Japanese counterpart to this one is the 35th volume of the Simple Series 1500, stupidly titled The Shooting. As poor as the game is, at least the Western companies gave it a more decent name. They also added subtitles instead of dubbing all the Japanese dialogue, which can be considered another wise move for not running the risk of putting the game to widespread shame (Castle Shikigami 2, anyone?). Just for the record, the other entry in this short-lived budget shooter series is Starfighter Sanvein. 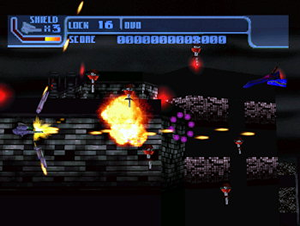 Space Shot is full of animated sequences that tell the story of three teenage pilots and their interaction in battle. While not exactly state-of-the-art material, it’s no disaster either and at least doesn’t veer into annoying grounds. Japanese light humor with grainy 3D and dodgy subtitles set the mood for a first level amidst building and beacons. It’s impossible not to notice the immediate nod to Einhänder, only with unpolished polygonal backgrounds. The same atmosphere and the blocky designs continue throughout the game as you navigate through city, ocean, desert, lava and an orbital station. Some stage themes seem to have been lifted directly out of Thunder Force V, an influence that’s also noticeable in some bosses and on the design of the ship.

Unlike most horizontal shmups Space Shot unfolds in an open space scenario where no walls or indestructible obstacles of any kind are to be found. The angle of the main shot spread (□) can be adjusted whenever you stop shooting, locking in place when you’re actually firing – kinda like what you have in Sol-Deace, only here you can also shoot backwards. A detection area defined by the opening of the cannons is activated by pressing ×, with missiles being fired on all targeted enemies upon the release of the button. The next two attacks are limited by the overdrive gauge. There’s the purple laser of death (R2) and a boost that can be equally used for evasion and offense (R1). Both will cause overheating if the gauge reaches its maximum, and if that happens the ship needs to go through a cooldown period before you can use these attacks again. There are absolutely to items or power-ups in the game, which implements a health bar for each life.

Boosting against and around enemies and bullets is the only scoring device that "matters" in Space Shot. You can also kill simultaneous enemies with the laser beam, but the rewards aren't nearly close to what you get by boosting, and when I say they aren't I mean it: this is by far the most fucked up scoring system I've ever seen. For example, try playing the first stage as you would in a regular shooter, taking note of your score. Restart and restrict your actions to boosting around those blue ships and the exploding mines, never mind losing lives. See what I mean? It’s not even funny! The gimmick keeps adding crazy multipliers for continuous boosting, but it’s extremely unreliable for several reasons: the animation is too fast, you can’t clearly tell when you’re invincible so you often materialize inside an enemy/bullet, you need to be going somewhere or the boost won’t do anything (it’s really annoying). The developer could’ve gone for something else more palatable, such as slowing things down when boost-grazing or simply giving rewards for multiple missile targeting (there’s no reward whatsoever for simultaneous missile kills). But then again, the missile attack is slow and ultimately useless, unless you're looking to induce a bit of slowdown on bosses.

In order to have a taste of how every aspect of the gameplay reflects in scoring, the player can try to complete the missions in the Training mode or just view the game samples built therein (access by pausing when a mission is started). They pretty much give away how distressing the scoring system actually is.

Scoring problems and ugliness aside, as a regular shooter Space Shot isn’t a total waste. Bosses are large and some of them can take you by surprise, the graphics of the revolving base in the last level are really cool (definitely the highlight of the game) and the music can be fairly engaging at times. Sound effects are kinda grating but strangely fitting. Enemy resistance often appears in flocks and waves, and with the exception of the last stage there’s always time to breath in between their attacks. Cheap deaths might occur due to enemies appearing from behind or materializing from the background, but regardless of how you perceive the game it’s not possible to make it any easier or harder because there are no difficulty tweaks available. Controls are fully customizable and a Stage Select feature is unlocked inside the options menu when you complete the game with or without (unlimited) continues, but keep in mind that the last boss is less of a wimp if you get to him on one credit.

Normally there are no extends, but I found out that you can get extra lives by destroying whole sets of those blue ships with the boost command in the first level. Whenever I succeeded at that I’d go berserk with the boost thing just to see how far I could shoot scorewise without depleting my life stock – one or two lives in reserve would be okay to make it through the rest of the game.

I wonder if anyone out there is capable of filling the rest of the billion/trillion digits in the high score table (there is a save function). I almost doubled my previous high score, with over 90% of it being achieved in the first stage alone. 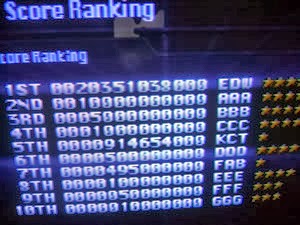