I have done this 300 times already. I mean, playing a shmup to the end with no continues and then writing a bit about the experience here.

Is that too much?
Have I started to scratch the bottom of the barrel?

The answer to both questions is, obviously, NO.

So here's to 300 blog entries for shmups 1CCed on video game consoles. From the last hundred 89 were done for the first time (cross-platform games counted), and 11 were comebacks for higher 1CC scores.

Shmup distribution by platform so far: 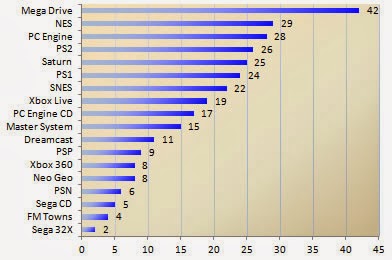 Shmup distribution by sub-genre so far:

Top 5 hardest 1CCs in the last hundred, in no particular order:

Top 5 easiest 1CCs in the last hundred, in no particular order:

Back in July 2010 I wrote a similar article celebrating 100 1CCs. By then I asked people what games they'd like to see here, and a fellow shmupper suggested Wings of Wor, Giga Wing 2 and Shikigami No Shiro II. The only one left for me to conquer is the latter, which is just as brutal as I expected but is about to break - if I'm competent enough. Apologies for taking so long to actually play them, buddy!

So now I repeat the same question. Is there any shmup you'd like to see here?
And before the funny bunch starts making jokes: yes, I'm ready to face DoDonPachi Dai-ou-jou!
:)
Posted by Edward at 4:23 PM