I was certainly thrilled when the time came to revisit this game, courtesy of a close circle of shmupper friends and our weekly online gathering. The new venture, however, did not start on the Playstation 2. The Playstation 4 was out for action in the living room and I thought it would be nice to try out the recent re-release of ADK Damashii, a compilation that includes five classic games from the golden era of SNK. Excluding the fact that the disc is a shameless carbon-copy emulation of the PS2 original (it's part of a "PS2 Classics on PS4 project" after all), a few sessions later it became clear that Twinkle Star Sprites was unplayable on it. I'll be the last person to complain about things such as input lag, but in a game where reflexes represent a huge part of the experience it's impossible not to. Something is terribly wrong in a shmup when you try to bomb, it just doesn't register and you die repeatedly because of that.

So there I went for the PS2 disc. On it Twinkle Star Sprites plays as nicely as the Neo Geo original. One thing is certain about the game: the more you play it the more you're inclined to admire its qualities. Truth be told, there's also a strong probability of developing a love/hate relationship with the game when you're dedicating yourself to solo play. Those little intricacies require lots of fine tuning just like the latest seasonal fighting game, after all Twinkle Star Sprites is by all means a fighting game disguised as a shmup.

My previous attempts at high scoring in this game were on the Sega Saturn and the Neo Geo AES. I touched the basics of the gameplay when I wrote about them, so this time I'll address some impressions from trying to play with a few characters other than Nanja Monja and Kim Kesubei. 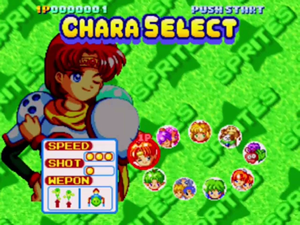 Arthur Schmitt being drafted to battle

Character Mode offers a roster of nine default "fighters" for you to choose from. With the exception of protagonist Load Ran, four of the others might appear in the initial four stages, and always in the same level (you either face one or another in the same stage). Then you fight Dark Ran, Mevious and Memory, the cutest final boss ever designed in a shmup. They can also be chosen for play at the start of the game with easy directional inputs, as well as Sprites, Load Ran's evolution when playing Story Mode.

Each character is rated in three steps for speed and power. Regardless of that, their firing patterns and special attacks also differ, so power might not be that relevant when deciding on a specific character.

My first choice this time around was Load Ran (misspelled as Load Run in the game's HUD), which is perceived as an all-around character (power: 2, speed: 2). Her special attack are these arching rabbits that home on the enemy's place and explode, and her charge shot is a powerful single blast. I reached Memory relatively fast, but I didn't quite feel comfortable with Ran's ability to evade her attacks. Fun fact: Load Ran is Memory's daughter.

With speed at 3, Arthur Schmitt is quite fast, but his attack power is rated at 1 and his main shot is rather lackluster. What made me try him was his charge shot, a laser beam that can be moved around while being discharged. His special attacks are one or more rockets that materialize at the bottom of the enemy's screen and fly upwards (if they happen to occupy a large horizontal line the enemy might be in big trouble). Since the attacks of his boss form cover a large portion of the screen I assume he must be great against human opponents, but of course that's not true when playing the computer. Fun fact: in the game's story he's a casanova who has fallen in love with Load Ran.

Based on her stance and overall behavior, Realy Till seems to be the most mature of the human characters in Twinkle Star Sprites (power: 2; speed: 3). The only thing that sucks about her is the charge shot, a flamethrower with short reach and unreliable effectiveness. Her single shot is my favorite of the three characters I played with, and her special attack is one or more chubby dragons that descend on the enemy's screen and turn either left or right. Storywise apparently she aspires to be a great singer.

I switched between Load Ran, Arthur Schmitt and Realy Till at random. After a while I avoided sending reversals to the adversaries (shooting fireballs and sending them back) because they might be "reversed" again as special attacks. That certainly helped against Mevious and his bat abuse during fever spells. Even though reaching Memory with all three lives in stock (an extend is achieved at every 500.000 points) and then getting slaughtered over and over might be good for scoring, it does incur in a mild enraging effect that's inversely proportional to how fun the game is. Speaking of fun, Twinkle Star Sprites is undoubtedly perfect for quick sessions of concentrated shooting as long as you don't attempt the clear too fiercely. It's also a very short game that can be completed in less than ten minutes.

The ADK Damashii disc is decent enough as a compilation, with basic features such as a sound test, two types of screen adjustment and auto save. Note that you need to leave the game for your save to work (SELECT → Exit to Menu), and you also need to load it manually in order to see your saved high scores. In the case of Twinkle Star Sprites, just like in the original Neo Geo title the option to activate an extra button for autofire is also present. Last but not least, ADK Damashii's instruction manual is awesome and brings extremely detailed information for all games, too bad it's all in Japanese. Unfortunately the PS2 version was only released in Japan, and this same fate also struck the pseudo-sequel Twinkle Star Sprites - La Petite Princesse.

After a few days hammering the game, 1CC success eventually came with Realy Till as seen in the final stat screen below. I played on difficulty level 4 (MVS). 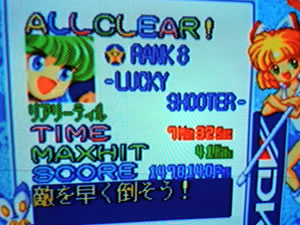