Even though lots of games were made on those special super scaler arcade boards manufactured by Sega in the 80s, there was a very particular style of sprite scaling that became famous in that decade. Super scaler boards were perfect for racing games such as Out Run, but also gave birth to several classic rail shooters such as After Burner, Thunder Blade and Galaxy Force II. Many video game fans still consider the term "super scaler technology" to be a synonym with Sega, but it should also be known that in the case of rail shooters a few other companies soon ventured into this niche subgenre, as seen in the likes of Night Striker by Taito, among other noteworthy titles of course.

The Sega Saturn version was the third home console adaptation after the much criticized port for the Mega CD and the previous release for the Playstation. Rebaptized as Night Striker S, the game includes a new FMV introduction and an exclusive arrange mode comprised of only six straight stages, as opposed to the branching levels seen in the original arcade blaster. As for the core game, it isn't a faithful conversion since it changes enemy locations, firing patterns and energy recharge routine, all of these leading to an easier challenge overall with a lower framerate. Well, the arcade game wasn't that difficult to begin with, so here we have a rail shooter that can be enjoyed more leisurely than those tough-as-nails Sega classics.


In a large city
(courtesy of YouTube user FunCade 64)

Drawing clear inspiration from TV series Knight Rider, this game presents itself as a dark mixture of  Out Run and Space Harrier. The player pilots an advanced hi-tech armored car sent on a mission to rescue a scientist and his daughter, who were kidnapped by terrorist insurgents. The car fires deadly plasma beams and is able to take flight at any moment, going through a series of environments such as city, suburbs, sky, tunnel, temple, canal, sea, factory, etc., which are repeated throughout depending on the path you decide to take. With the exception of the final level, each stage branches into two splitting tunnels where the player must choose the stage to play next, much like Out Run and Darius. Final stages are also unique in that the armored car receives special attachments or morphs into completely different forms, such as a robot or a futuristic motorcycle.

Each hit taken takes away one energy shield. Special warnings appear when you're low on energy, and the credit ends if you run out of shields and get hit. For each level completed you receive a bonus based on the time remaining from the boss fight, 100.000 points for each shield in reserve and two energy shield refills (in the original arcade game you only get one). By killing all enemies in a level you win a special bonus of one million points, but there's an even better reward waiting those who're able to not get hit while refraining from shooting. This "pacifist bonus" starts at 2 million in the first stage or in other million multiples in further levels, with figures that increase greatly if you're able to go on unscathed afterwards.

While the pacifist bonus goes against one of the defining pillars of the genre (a shooter where you're encouraged not to shoot!), it does provide a special kind of rush for those willing to pursue it. By setting auto neutral to OFF in the options you're able to hover anywhere around the screen without being drawn to its center, so that certainly helps in identifying better spots for a safe navigation. The pacifist bonus can also cause some restartitis, but since the game is relatively short and entertaining the whole process shouldn't be that taxing. Especially when you realize how significant it is for scoring purposes, of course. 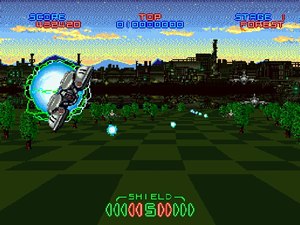 As I mentioned above, Night Striker S is decidedly easier than the arcade game. Nevertheless the game preserves a few important aspects such as the ongoing bonus score of 8× when you're driving on roads instead of flying (doesn't work in sky, river and sea areas) and the fact that flying enemies do not incur in any collision at all (you only crash against explicit pipings/walls and vehicles/obstacles at ground level). There's no need to worry about making turns if you're at ground level, this is no racing game after all. Even though it's the visuals that attract immediate attention, one of the technical highlights in my opinion is the soundtrack delivered by Taito's in-house composer group Zuntata. Most tunes are pumping and atmospheric, and I personally love the one that plays in between levels.

After cleansing my gaming palate of the foul impression left by the Mega CD port, I can definitely say I started appreaciating this game. I've yet to try the Playstation version, but in whatever form it's a great pick for a quick rail shooting sci-fi romp, full of replay value thanks to the branching level structure. The picture below shows my best completion score on full defaults (Normal difficulty) except for control, which I changed to reverse. My chosen path was route ABDHLR. Even though it's a much harder game, unfortunately the arrange "Extra Game" mode shares the same high score table as the main arcade course. The disc does include a save feature, which is nice. 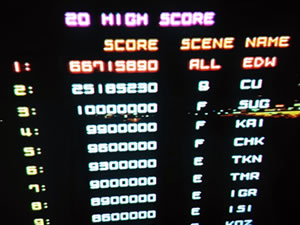