Following the experience with the FM Towns port, I felt it wouldn't be too bad to seize the momentum and revisit the PC Engine CD release of Super Raiden. I also wanted to compare the difficulty between them, because in my mind I always felt that Super Raiden was tied with the SNES port as being the easiest rendition of Raiden on a home console. It took me a few days to recollect some of the related intricacies, but eventually I suceeded in surpassing my previous high score in 32%. Having renewed my awareness on the game, the first conclusion I can draw is that Super Raiden is one of the most fun home ports available - besides being leagues away from the difficulty of other versions it also comes with two brand-new very cool extra stages.

Even when comparing only the eight original levels present both here and in the HuCard version, it's quite clear that Super Raiden is a tad easier than its base mold (less and slower bullets). Hudson Soft reserved the well-known, expected challenge for the new stages, with more aggressive snipers and faster bullets everywhere, all of this while keeping the same atmosphere all Raiden fans love about the first game in the series. It's a much better treatment than the one that was given, for instance, to the "beefed up" CD port of Zero Wing - the extra stages in that game just failed to capture the excellence of the original material. 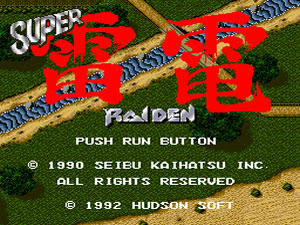 With that said, aside from the addition of the new stages the best improvement this version has is the awesome CD-quality rearranged soundtrack, a well deserved step-up from the rather weak music of the HuCard port. It's got a very particular groove, quite different from all other arranged BGMs available in other CD-based ports (PS1 and FM Towns). Graphics up to the 8th stage mirror the ones found on the HuCard, and the game mechanics remain exactly the same: vulcan shot (red) and laser shot (blue) combined with straight (M) or homing (H) missiles, with bombs (B) available for delayed but powerful destructive blasts; medals collected × bomb stock × 1.000 is the bonus you get at the end of a level; there's no limit to how many bombs you can stock, even though the maximum shown is 9; all surplus power-ups are worth 5.000 points; hidden fairies are worth 10.000 points and a batch of extra power-ups if you die; score-based extends are given with 100.000, 500.000 and then for every 500.000 points afterwards; 1UPs will appear randomly.

I'm sure everybody will agree that the original Raiden is a hard game. Some people won't have the endurance to see it to the end, but if format isn't a problem, a Turbo Duo is available and they're still in the mood to play it, my advice for everyone is to try Super Raiden. Sure it has checkpoints, but dealing with the game as a whole is considerably easier than, let's say, trying to suceed in the Mega Drive port or even the HuCard version itself, with one condition: do not use the laser weapon (if you do, the speed of enemy bullets will increase drastically). The extra levels are great and pump up the challenge as you reach the end, demanding a lot more from the player's dodging abilities without being overly cruel. There's even a real alien final boss, something that fills the void caused by the large tank boss of the regular Raiden – if I'm battling an alien race, why not have an alien final boss instead of another bloody super-armored tank?

Playing this game again gave me the chance to refine my strategies, especially on bosses. Now I refrain from bombing until the 6th boss, simply because those two tanks are plain evil. The 5th boss isn't that hard now - I stay on one side and avoid destroying both of his lateral wings, damaging his central body with the vulcan shot and homing missiles. The new final boss puts up an epic fight, but eventually I was able to take that beast down even if I died on him.

Just like in the HuCard version, here the game doesn't save or buffer high scores, but it's possible to pause right after dying if you want to take note of your score. Perhaps due to the inclusion of the extra stages and the fact that there's no limit to the bomb stock, the famous million point completion bonus is absent in Super Raiden. Another noteworthy gameplay aspect concerns the second loop. Contrary to what happens in other loopable ports, here the increase in difficulty is minimal, almost negligible.

The first death in my new best run happened in stage 2-9 (believe it or not, I was rather sleepy and did a stupid mistake). It was really tough to recover then, and my credit ended in stage 2-10. 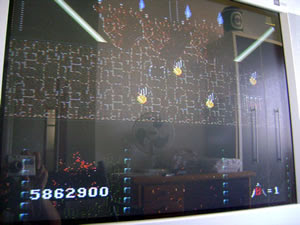 And that's it, after so many Raiden ports I guess it's finally time to move on to Raiden II!
Posted by Edward at 8:45 AM