If you're a shmupper life will never be boring nor easy if you have any of the Gradius games around. Almost all video game generations and consoles have at least one chapter of the series in their libraries. Being such an old franchise, it's no surprise that its first game still stands as the most ported of all Gradiuses. Looking back today it might pale when compared with the later chapters, but a single credit is all it takes to remind anyone of how well crafted, fun and challenging the game still is. Its age is only apparent when you put it side by side with its sequels. Thanks to the good chaps at the RG Forums I was once again drafted to pilot the bold Vic Viper against the forces of an evil space fleet controlled by a mutant brain and its team of energy Cores. Note: I actually invented this last part of brains + cores since the game never hinted at any actual story.

Gradius can be played on the Playstation by means of the Japan-exclusive compilation Gradius Deluxe Pack, which also includes the sequel Gradius II. For those wondering about the differences between this package and the Saturn version, I'll just spare the drama and tell you up front that there aren't any. None. Both discs seem to have the exact content, down to the animated intro and the NO WAIT option unlocked upon game completion - it completely removes the slowdown present in the arcade original, properly emulated during the course of the normal game. If you're a proud owner of any of these consoles you can settle with either package, only completists like myself are crazy enough to go after both of them for great personal justice/pleasure. 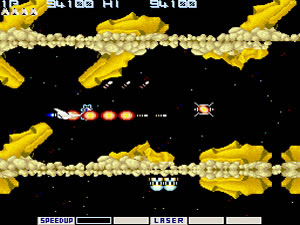 If you want a more detailed rundown and some other notes on the gameplay of Gradius you can also check what I wrote about the Saturn port. Other than that all you need to know is that you're able to shoot and drop missiles (both actions can be mapped to the same button, with autofire if you will) while activating power-ups according to an weapon array comprised of speed-up, missiles, double, laser, option and shield. At least one speed-up and missiles are essential, double and laser depend on the pilot's approach to strategy and play style, options can be summoned up to the quantity of four and the shield is there for you to use as desired. The more options you activate the harder the game gets, and while options are the main cause of rank progression all other upgrades also have some part in the challenge equation.

Going into a strictly score-oriented campaign in Gradius was something a bit different. I confess I didn't spend as much time with it as I wanted, but I aimed at killing every possible enemy, allowing every hatch to release more popcorn and even exploiting checkpoints so that I could inflate the score a bit before looping the game. It felt a little cheap, the main reason being the steep difficulty increase of the second loop. Beating the first loop on a single life feels great (and I did it a few times), but the chances of getting a good score out of it are slim. Dying in the wrong place in the second loop can deplete that fat life stock really fast because the Vic Viper's starting speed becomes even more of a problem than it originally is.

A quick stage breakdown on the methods I used most this time:
It's easier said than done, of course. The arcade original is still a great challenge to this day, in whatever console form you can get your hands on (Playstation or Saturn). There are three screen format options to choose from (Arcade, Arcade Zoom and Full Size) and as I mentioned above it's possible to map all controls to different/same buttons with/without autofire.

My best scoring credit this time ended in stage 2-2, as shown below (NORMAL). 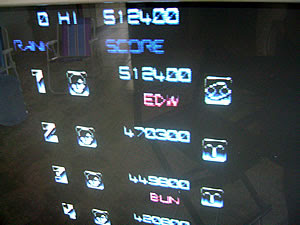