Today Taito is a shadow of what it used to be when real arcade games were still being produced by the dozen. Though never reaching major preference among shooter fans, the company was a powerhouse in variety and one to respect in regards to pioneering ideas. That said, RayForce is probably the best example of such design qualities. It’s still regarded by most players as the best in its own series and also one of the most influential shooters of all time (some of the closest “children” are Soukyugurentai and Kamui, but I also see lots of similarities with G.rev’s Under Defeat).

Owners of the Playstation 2 ought to be happy because the developer included RayForce in the game gallery of the Taito Memories II - Vol. 1 compilation. Also known as Taito Memories II Joukan, this exclusive Japanese package carries the distinction of allowing all its vertical shooters to be played in TATE. Filtered graphics aside, it’s a great emulation job that’s probably closer to the arcade experience than the port available for the Sega Saturn, which I beat a few years ago. For the record, that version appeared with different names (Layer Section in Japan, Galactic Attack in US and Europe), whereas the arcade game also went by the name Gunlock in Europe. Console-wise, RayForce was also released in the Taito Legends 2 package for the Xbox.

Excluding the generic and stupid US/PAL Saturn title, all other names convey the mood of the game quite well. The force of laser rays is what drives the intensity of the gameplay, two targeting layers define how passive or aggressive you must play and locking on to enemies is the key to achieving higher scores. 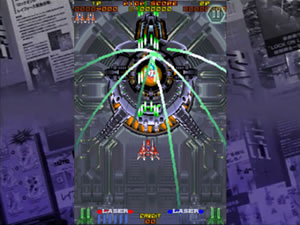 If you wait a minute to “insert a coin” (button L2 by default) and start a game, the mood is established with subtle efficiency by a short animated sequence that reveals the pilot to be a woman and shows the RVA-818 X-LAY firing its lasers to take down an opponent. Later on the characteristics that make RayForce such a remarkable game become evident: the exquisite art design, the array of graphical effects (morphing, transparency, rotation, distortion, zooming), the organic aspect of enemy attacks, the elusive evolution of the challenge level within the game itself and the sense of adventure you get from the stage succession (levels are tied into each other as you go deeper and deeper into the enemy’s core). The resulting grandeur is undeniable.

Only two buttons are used to play the game. Fire the regular weapon with one button, fire lasers with another. While the regular weapon hits enemies located at the same plane/layer as the spaceship, lasers will target everything in the lower layer that was previously locked on with the crosshair that’s permanently displayed in front of the ship. The crosshair will shrink a little once eight targets are locked on, so that means eight is the maximum number of simultaneous laser rays that can be fired. A lock-on will get lost after five seconds have elapsed or when the target gets off-screen, something that needs to be considered if you’re aiming at deploying the maximum number of lasers. Since a growing multiplier is applied to simultaneous lock-ons, getting eight of them in the same blast is absolutely important for scoring. The multiplier is applied to the enemy’s base value, starting with ×1 for the first lock-on and ending with ×256 for the last lock-on. For example, in a group of eight enemies worth 100 points each the last one will eventually yield 25.600 points if all of them are destroyed in a single laser attack.

Initially the player starts with the ability to lock on to five targets, but by collecting a green capsule power-up this number is increased to eight (the lower status bar shows how many multiple lock-ons you’re able to achieve). All power-ups are released from red-colored enemies, therefore it’s easy to spot the ones that are more important to kill in order to upgrade the ship. Besides the green capsule for an additional lock-on you also come across red and yellow crystals that increase the power of the main shot – it takes three reds or one yellow to upgrade one level, from a total of six. Surplus power-ups will be converted in points, starting in 1.000 and maxing out at 10.000 points each. Dying downgrades lock-on and shot power by one level, but if you’re lucky a random item will emerge at once from the top of the screen so that you can start rebuilding firepower faster.

RayForce is incredibly fun to play, but it’s also frustrating in the same measure. As you start to dig it it’s really common to end a credit in horrible ways, as in “WTF, that laser wasn’t there the last time I checked”. That happens because the game has one of the most cruel rank progressions in the history of the shooting genre. In order to survive it’s necessary to know each section and enemy beforehand, as well as the most appropriate strategies to take them out. Lasers emerging from the lower layer take some time to reach the ship’s altitude and can be suppressed by standing close to their source, but this safe point-blank distance is gradually reduced as the game progresses. Positioning is key to stay alive, and performing abrupt movements or behaving like a sitting duck often lead to unavoidable entrapment. With the exception of bosses, enemy bullets are 99% aimed at the player, with thin projectiles and flying enemies never having the same behavior in multiple credits.

Rank, by definition, is a programming device that increases the game’s difficulty in response to the performance of the player. Rank-controlled difficulty in RayForce is responsible for the increasingly faster speed/rate of enemy fire, as well as the overall enemy aggression. There are strict rules to how this is implemented, but in a nutshell it comes down to the simple fact that the longer you survive without dying the harder the game will become. Die and experience an immediate but brief decrease in difficulty. It doesn’t matter how you deal with your lives and your extends though (first with 1 million, second with 2 million points), by the time you reach the last stage the game will try to stop you in its hardest difficulty setting. Devising advanced scoring techniques and coming up with the best routes to chain lock-ons and reap more points from what the game throws at you is great, but you can never underestimate RayForce’s ability to surprise the player. You blink, you’re dead. You falter, you’re toast. Be cool, be on your toes, this game is great but it’s no piece of cake at all.

One thing is certain: this isn’t a good shooter to play under pressure. It’s perfect for relaxed stretches of constant practice – which is actually the best way to approach and improve on it – but having to learn and trying to score higher in RayForce during a short timespan can be more infuriating than usual, not to say devastating to its appreciation as an intricate yet highly rewarding experience. This time I did it under pressure, but I was extremely grateful for having previously played the Saturn port. I have even started to enjoy the game’s soundtrack more (or maybe I just prefer the original arcade music to the arranged tunes from the Saturn version). 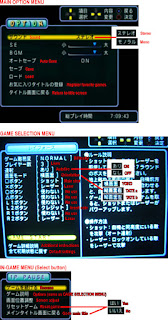 Click for the option menus translation for RayForce on Taito Memories II - Vol. 1

If you haven't noticed yet, Taito Memories II Joukan is an outstanding collection. It offers fully customizable controls for RayForce, as well as two TATE orientations, co-op, save functionality for options/high scores and an absolute lack of loading times after the game is initially loaded. Although TATE is the biggest edge here, the game plays fine in YOKO with no loss of play area at all. I beat the game on TATE (Normal difficulty) and tried to get the best lock-on chains I could in the first half of the credit, playing safer in the last stages so that I could finally see the end. 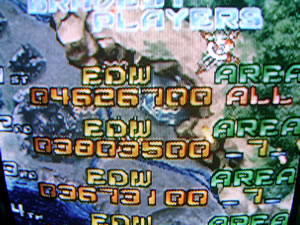