Even though MUSHA is part of the Aleste series, it is more of an offshoot than what we would normally call a sequel. Rare and expensive are two words constantly associated with the Genesis cartridge, in one of those uncommon inversions of the norm (where Japanese goods are often costlier than their Western counterparts, when these exist). Strangely enough, the Japanese game is named MUSHA Aleste whereas the Genesis version excludes all references to the Aleste brand, starting with the title. The meaning of MUSHA is clearly displayed in the game’s box: it stands for “Metallic Uniframe Super Hybrid Armor”.

Despite being released very early in the Mega Drive lifespan, I only came to know MUSHA much later in my gaming life. The oddest thing was my very first impression: in its naked form (naked = with no special weapon) this super hybrid armor reminded me of a beetle. Then for a long while I just referred to MUSHA as the game of the “flying beetle” (don’t mock me, I know beetles are capable of flying). As the intro shows, a group of pilots with their armors is suddenly knocked out by a powerful enemy from afar. You, as the player, are the sole survivor. You decide to go into battle all alone, against the express order of your commander. The adventure starts and soon you see yourself flying over elevated Japanese villages, a factory with moving walls, deep ravines, thunderbolt-stricken clouds, forests, huge battleships and a deadly enemy fortress.

According to the tradition of previous Aleste games, relentless action awaits the player in seven stages of frantic, dynamic gameplay. Graphic design excels at pretty much all levels, presenting creative enemies and bosses based on all sorts of ancient Japanese warfare/warrior culture while offering fast scrolling with lots of bullets and debris flying everywhere. Best of all, it’s virtually free of any slowdown. MUSHA is a technical 16-bit marvel, it's no wonder this game is so highly regarded by so many people. 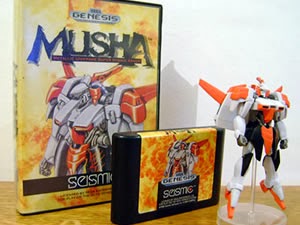 Replacing the spaceship with a flying robot shifted the series to a different level, and that’s another reason for the game's widespread aesthetic appreciation (the idea of a badass mecha clicked much better than the walking robot of Aleste Gaiden, for instance). The music also seems to play a big part in the community praise, even though I particularly consider the soundtrack to be overrated. One thing is certain though: MUSHA plays like a charm from start to finish, without a single dull section. It's a busy shooter and a considerably manageable achievement at the same time, easy yet highly entertaining. The lower difficulty is somehow compensated by the lesser number of extends (when compared to previous chapters in the series), which imposes a certain degree of distress depending on where you die.

Okay, so your friends were pulverized and you’re alone as flaming skulls start dropping from the top. Button C shoots, button A cycles the arrangement of your options and button B fires the currently active special weapon. Hovering harmless ships are responsible for bringing two types of upgrades: power chips and special weapons. Chips slowly increase the main firepower while adding extra options that automatically replace the dead ones (3 chips for 1 option, see beside the life stock on the top). Special weapons come in three colors: green for lasers, orange for cluster bombs and blue for a rotating shield. Rule: stick to the same special weapon to increase its power up to “arm” level 4. Having a special weapon is not only good for attack but also for defense, since you just lose it instead of dying when hit. Death and loss of all power only occurs if the robot gets shot while carrying no special weapon. I guess the comparison is appropriate for those who know Darius: a weaponless mecha in MUSHA is much like a shieldless Silver Hawk.

It’s also possible to select between eight available flying speeds by pausing. This is the only functional oversight of the gameplay: why not map button B to fire both shot + special weapon and leave button C for speed selection? Anyway, pausing is no big deal, the game memorizes the setting in between credits and even upon a console reset. The last part of the basic gameplay is the behavior of options. They eventually die by taking too much damage and get instantly crushed when touching walls. Choosing the option configuration that best fits each situation is important, as in the wall gaps of the high speed scramble of stage 3 (keep them in back or reverse) or the mid-boss of stage 7 (select form-free to hit him while you stay on the outside). The order of option cycling is form- "forward" → "3way" → "back" → "reverse" → "roll" → "free" → "forward".

Extends are signaled by a very characteristic coin-like noise. They come with 100.000, 1 million, 5 million, 10 million and every 10 million points afterwards. Normally scoring higher is achieved by milking projectiles and taking all special weapons (4.000 points each), while beating the game adds a massive 100 million bonus to the final score. There are some very shady occurrences of bosses or mid-bosses granting outrageous score boosts, but these seem to be totally random and can’t be properly reproduced.

Unfortunately any normal attempt at scoring higher is useless because the scoring system in MUSHA is broken. I have to admit I was very disappointed when I realized that you can get as many points as you want as soon as the game starts: after the brief shower of flaming skulls wait for the chip carrier, get at least 3 of them to create an option, choose form-reverse and align yourself on one side so that you avoid the turrets and hit only the dropping bullets. When I tested this it took a little over half an hour to achieve one million points - be my guest if you want to counterstop in a few days.

Even with its natural glow diminished by the above screw-up (damn it, Compile!), MUSHA still stands as a game with remarkable fun factor. I really like the attention to details, such as the special weapon cartridges being replaced on the robot's back when you switch colors, the desperate final attempt of that recurring enemy as soon as the ending sequence starts or the black hole ability of a fully powered orange weapon (it even sucks bullets!). From what I remember, direct sequel Robo Aleste doesn't suffer from the same scoring system oversight and is considerably harder as well. Let's see if I can improve my high score on that one soon, for now I'll wrap this text with the picture below, a 1CC of MUSHA on Normal from which 5 million points were achieved with the shameful milking described above. 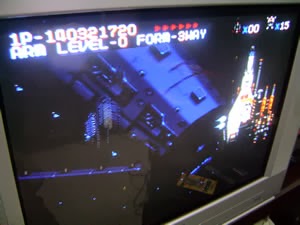